Our fifth and final match of our Four-Jerk Football Fantasy Camp took place in Birmingham. Some magazine recently named Birmingham an up-and-coming music scene, but the city seemed more like a place lacking any redeemable qualities whatsoever. Nothin' doin'.

Our host for the day: Martin O'Neill's Aston Villa Football Club. The Villans started off the year pretty hot but have been languishing recently as their early luck trails off. If you ask me, I think the poor karma at Villa Park all began when striker Juan Pablo Angel shanked a penalty kick wide and then scored an own goal for Tottenham Hotspur within the span of two minutes back in mid-October. 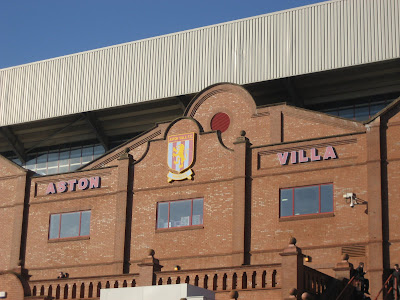 Villa were the first tickets we acquired in our arduous search for ducats in a foreign and generally ridiculous system. Someone in our group had a connection to Randy Lerner, owner of both the Cleveland Browns and Aston Villa, and I'm glad this one worked out for us: On one hand we had the brand new strike force of John Carew and Ashley Young (both making their home debuts); on the other we had a West Ham United club fighting for their lives to avoid relegation (for the uninitiated, the bottom three clubs get demoted to a lower division).

Throw in some very talented players on both sides and one of my favorite youngsters in Gabriel Agbonlahor, and we were ready for some top-flight football. Oh, and hey, NFL Legend Jim Brown was there. For real, yo. I bet he was so angry the whole time. 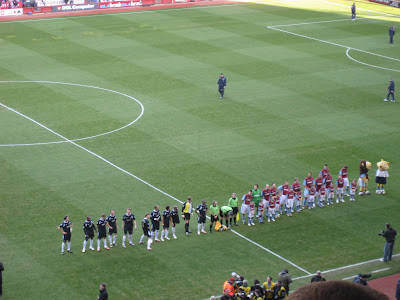 Villa scored in the 36th minute when the Young fed Carew for a pretty goal, finally scoring after a bunch of solid chances. And while someone watching at home on television probably couldn't really see it it, Gareth Barry dominated the play for Villa. He was everywhere, and he made absolute fools of several of many West Ham midfielders and defenders (including but not limited to the over-matched American Jonathan Spector). Incidentally, Barry absolutely schooled Spector at one point, leading West Ham keeper Roy Carroll to run out 30 yards and get up in his grill. That was, as the English say, "awwwwkward."

Spector also played very poorly with his winger on the right side, Israeli international Yossi Benayoun. I love watching Benayoun scoot -- he's got serious talent -- but he didn't really play all that well. He was all sizzle and no steak, or keeping with his heritage, all sizzle and no brisket; all Numbers and no Deuteronomy. As I said, he and Spector played horrifically together on the right side, which is clearly not the first time Israel and the United States have combined to just completely fuck shit up. Political and soccer humor, you love it.

The match and our 450 minutes of soccer both came to an end with a mad goal-mouth scramble by trailing West Ham, which had at least three strong chances at the back of the net with little time remaining. Thomas Sorensen, the Villa defense and the crossbar combined to keep the home side's clean sheet intact, and Donnie Fiedler and I had just seen five home teams win five matches (Handstand and Zebra caught one draw at Emirates). Sweetness.

And if you've made it this far, I hope you've figured out by now that this entire post was just a front so I could post those clever little Israeli jokes about Yossi Benayoun. Truth.

Slack Video of the Day: Here's a cool video I shot of Aston Villa and West Ham exiting the tunnel and some panning of Villa Park.